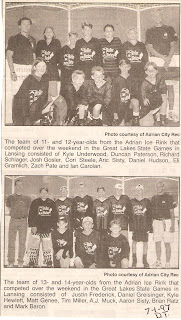 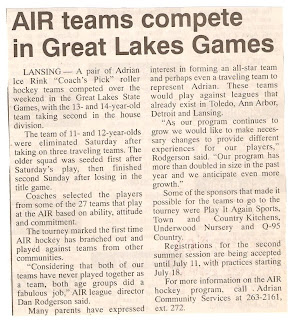 
LANSING—A pair of Adrian ice Rink “Coach’s Pick” roller hockey teams competed over the weekend in the Great lakes State Games, with the 13- and 14- year old team taking second in the house division.
The team of 11- and 12- year olds were eliminated Saturday after taking on three traveling teams. The older squad was seeded first after Saturday’s then finished second Sunday after losing in the title game.
Coaches selected the players from some of the 27 teams that play at the AIR bases on ability, attitude and commitment.
The tourney marked the first time AIR hockey has branched out and played against other teams from other communities.
“Considering that both of our teams have never played together as a team, both age groups did a fabulous job,” AIR league director Dan Rodgerson said.
Many parents interest in forming an all-star team and perhaps even a traveling team to represent Adrian. These teams would play against leagues that already exist in Toledo, Ann arbor, Detroit and Lansing.
“As our program continues to grow we would like to make necessary changes to provide different experienced for our players,” Dan Rodgerson said. “Our program has more than doubled in size in the past year and we anticipate even more growth.”