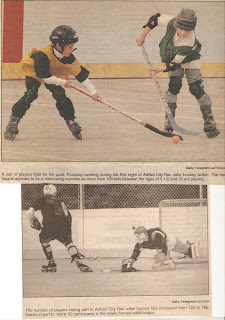 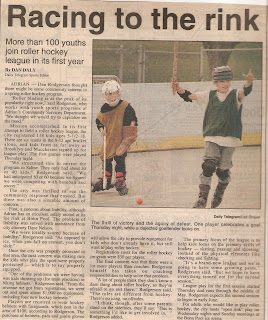 Racing to the Rink
More than 100 youths join roller hockey league in its first year
By DAN DALY
Daily Telegram Staff Writer
ADRIAN—Dan Rodgerson thought there might be some community interest in a spring roller hockey program.
“Roller blading is at the peak of its popularity right now,” said Dan Rodgerson, who works with youth sports programs at Adrian’s Community Services Department. “We thought we would try to capitalize on the trend.”
Mission accomplished. In its first attempt to field a roller hockey league, the city registered 118 kids. Kids from as far away as Brooklyn and Manchester signed up for league play. The first games were played Thursday night.
“We structured this to mirror the program in Saline. They only have about 30 or 40 kids,” Dan Rodgerson said. “We have anticipated 50 or 60 because we figured we were competing with baseball and soccer.”

The city was thrilled to see the community response that ensued. But there was also a sizable amount of concern.

First, a concern about liability, although Adrian has an excellent safety record at its ice rink at Bohn Pool. The problem of liability was solved with assistance from city attorney Dane Nelson.
“We were totally scared because of liability,” Dan Rodgerson said. “As opposed to ice, when you fall on cement, you don’t slide.”

“One if the problems we were having were kids showing up for practices in biking helmets,” Dan Rodgerson said. “From the revenue we got from registration, we went out and spent about $1,000 on equipment, including four new hockey helmets.”

Players are required to wear hockey helmets with faceguards, which cost in the area of $100, according to Dan Rodgerson. The purchase of helmets, pads and goalie gloves will allow the city to provide equipment for kids who don’t already have it, but still want to play roller hockey.
Registration costs for the roller hockey were 30 per player.

The final concern was that there were a lot more players than coaches. Dan Rodgerson himself has taken on coaching responsibilities to help solve that problem.
“A lot of people think they don’t know a thing about roller hockey, so they’re afraid to go out there,” Dan Rodgerson said. “The rules are different from hockey. There’s no icing, no offsides.
“I think, though, after some parents stand on the sidelines, they’ll say: ‘This is something I’d like to get involved in,’” Dan Rodgerson added.

The primary focus of the league is to help kids focus on the primary skills of hockey—skating, passing and shooting, instead of the physical elements like checking and fighting.
“It’s a brand new league and we’re going to have some growing pains,” Dan Rodgerson said. “But we hope to have everything ironed out for the second session.”
League play for the first session started Thursday and runs through the middle of May. Dan Rodgerson expects the second session to begin early June.