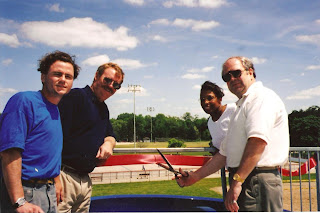 Attraction expected to open this year
By MATT CROSSMAN
Daily Telegram Staff Writer
ADRIAN—The investigation is done, the city commission approval earned.
The only question remaining is who gets the honorary first trip down Bohn Pool’s new water slide this summer?

“We assume Dan Rodgerson will be the first one down, and the mayor second,” said city commissioner Eric Sullivan.
But city attorney Dane Neilson already had the inaugural slide reserved.
“I told Kelli she could be the first,” He said.
Dan Rodgerson led the charge in persuading city commissioners to buy the $99,176 slide. He began investigating the purchase shortly after joining Adrian’s parks and recreation department as a recreation supervisor in the late summer of 1995.
Monaghan has helped Dan Rodgerson and community services director Mark Gasche develop a master plan to develop Bohn Pool into a “family oriented aquatic center.” The 144-foot long, 20.5-foot high is considered the focus of that effort.

In a proposal to city commissioners in November, Gasche said funding for the slide might have to come through financing.

But by rearranging priorities in his capital budget, Gasche said he can buy the slide using funds from the current budget year and next budget year. City staff felt getting the slide this year was important because it will help generate more revenue through increases fees.
“When we looking into financing there was some obstacles there,” Gasche said. “It wasn’t impossible, but it seemed more feasible to use our own money.”

City commissioner Chuck Chase and Gasche praised Dan Rodgerson for thoroughly investigating the feasibility of the slide, he said.

“I think it will really be a boom for Bohn Pool,” Chase said.