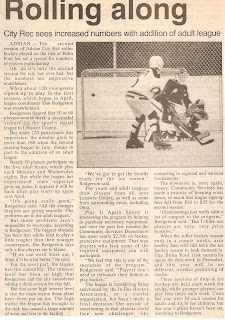 Rolling Along
City Rec sees increases numbers with addition of adult league
ADRIAN—The second session of Adrian City Rec roller hockey played on the rink at Bohn Pool has set a record for numbers of players participating.
OK. So it’s not only the second session the city has ever had, but the numbers are impressive nonetheless.
When about 120 youngsters signed up to play in the first session, which began in April, league coordinator Dan Rodgerson was overwhelmed.
Dan Rodgerson figured that 50 or 60 players would mark a successful venture for the sport’s initial league in Lenawee County.
But while 120 participants was impressive, the number grew to more than 180 when the second session began in July, thanks in part to the addition of an adult league.

“It’s going to be really good,” Dan Rodgerson said. “All the younger leagues are going smooth. The problems are in the adult leagues.”

But those problems aren’t impossible to overcome, according to Dan Rodgerson. The biggest obstacle has been that adults tend to play a bit rougher than their younger counterparts. But Dan Rodgerson says only a few players are to blame.

“If we can weed those out, I think it’ll be a lot better,” Dan Rodgerson said.
For the most part, the league has run smoothly. The interest level has been so high that Dan Rodgerson and the city considered adding a third session for this fall.
But that same high interest level is also the main reason those plans have been put on ice. The high traffic the league has brought to the rink has caused a large amount of wear and tear to the facility.

“We’ve got to get the boards ready for the ice season,” Dan Rodgerson said.
The youth and adult leagues draw players from all over Lenawee County, as well as some from surrounding areas, including Ohio.

Play It Again Sports is sponsoring the program by helping to purchase the necessary equipment, and over the past few months the Community Services Department has spent nearly $2,500 on hockey protective equipment. That way, players who lack some of the equipment can still participate.

“We feel that this is one of the successes of the program,” Dan Rodgerson said. “Players don’t need to refinance their homes to play hockey.”

Other Recreation Articles
Posted by moskito at 4:40 PM